There's no doubt that the writing and character development on the hit show hasn't been as good as previous seasons since the introduction of Negan. So much time has been devoted to one of the most annoying characters in TV history who fans either hate or love that precious few other characters haven't got a look in.

Since Daryl used a rocket launcher on Negan's men he's hardly had a thing to do which seems grossly unfair because he's one of the main reasons the show became so popular. And he's not alone in not having enough to do.

The show could stand to lose at least half a dozen characters - or more.

But there's also been some great opportunities missed to turn the show around.

I've listed just three but there's a lot more, including not killing Glenn and Carl.

1.Simon should have killed Negan not the other way round. The wrong bad guy died.

Negan should have ended up dead instead of the charismatic Simon. Simon was a far better character who could be threatening with a few words and he didn't go into endless long speeches, waving a bat around and grabbing his crotch.
Would Negan have really got the better of Simon in a one on one fight? I'm not the only one who doesn't think so.
More importantly why on earth would Rick let the sneering sociopath live? This is Rick who's despatched much less worthy victims in the past.

I can see no way that Rick Grimes and the gang would allow a man who terrorized him, his son and his friends and who made a sick pregnant woman kneel as she watched her husband (one of his best friends) have his head caved in by a bat, live.

2. Troy should haven't died in Fear The Walking Dead - he should have crossed over into TWD and played the role of Alden at the Hilltop.
***SPOILER ALERT if you haven't seen season 3 of Fear***
In case you didn't watch Fear before Morgan crossed over, Troy was one of the sons of a white supremacist, survivalist rancher, who the main stars of the show ended up staying with in season 3.
Troy was unhinged, racist, evil but smart and believed he could find a cure for the zombie virus by executing people and timing how long it took them to reanimate. All of his victims seemed to be targeted for their ethnicity.

His days on Fear ended after Madison killed him with two whacks to the head with a hammer because he led the walker horde to the ranch and effectively got almost everyone killed.
Troy was excellently played by Daniel Sharman in a season where Fear wasn't just better than ever, but in some people's opinions was better than The Walking Dead, Troy was one of the main reasons why.

Imagine how good it would be if Troy had survived and somehow ended up at The Hilltop and he was the one making eyes at Maggie and not Alden one of the prisoners from Negan's lot?
Imagine the creeping horror when Maggie  realize he's a monster after folk mysteriously disappear from Hilltop and end up as newly minted walkers?

Not for the first time, TWD missed a trick there.

Troy would have made the show better. There I've said it.


3. Bring on Clementine
When Tara met the mainly womenfolk of Oceanside who'd been devastated after Simon (without Negan's knowledge) massacred all their men and teenage boys, there was one character who stood out - Cyndi.

Only we didn't know who she was at first so I got my hopes up and thought, brilliant, Clementine the girl warrior from the excellent Walking Dead game is going to be on the show.

I was massively disappointed when it didn't happen and it was Cyndi.

Sure she came across as tough and is now the settlements de facto leader but she wasn't the Clementine players of that game love. And that was a pity because Clementine is as good if not better than most of the characters in The Walking Dead.
If the show's runners want to hear us cheering again they should bring Clementine to the show.
Posted by Jennifer Lee Thomson, Jenny Thomson 7 comments:

Email ThisBlogThis!Share to TwitterShare to FacebookShare to Pinterest
Labels: zombies, books, the walking dead 3 Times The Walking Dead messed up a chance to make the show better, bring game character Clementine to The Walking Dead, Fear star Troy for #TWD, Negan should have died not Simon


If it does happen and the makers of The Walking Dead can't change Andrew Lincoln's mind about leaving the show he made so popular, then they'll need an exit plan for the former sheriff.

1. Rick goes on trial with Negan

The storyline - Rick understands why Maggie's angry at him over Negan and suggests putting Negan on trial with the death penalty or imprisonment in the jail cell Morgan made for life as the potential punishments.

Negan says he'll only agree if Rick goes on trial too for killing his men whilst they slept at one of the Sanctuary's satellite stations.

Michonne defends Rick - In the comics she's a lawyer so maybe she can do that on the show? The kicker is that she must defend Negan too.

The storyline - Rick gets bitten and ends up in coma. He wakes up years later and Morgan's there watching over him. Unusually for him he's smiling. "When I heard a walker had taken a snack out of someone's arm and survived, I knew it'd be you."

Rick asks: "Where is Michonne, Judith, Daryl everyone?"

Morgan looks at him seriously and says, "Before I answer that I need to tell you a story; a story about how the world we were living in full of fighting and woe and misery and loss ended and a new one free from all that begun."

Once he finishes Daryl walks in with a teenage girl and Michonne.

3. A who shot Rick Grimes? storyline.

The storyline - It's a dark night and in the woods Rick meets someone to talk. We hear a person emerge from the darkness. A gun goes off but we don't see the shooter's face as Rick goes down after being shot in the head.

Imagine the posters for the second half of the season - the remaining cast lined up with wanted signs. Daryl, Maggie, Jesus, Eugene, even shocker, Michonne.

Not my idea of a fitting goodbye for the mighty Rick Grimes, but what if he's not dead and ends the season in a coma, the same way we first met him? 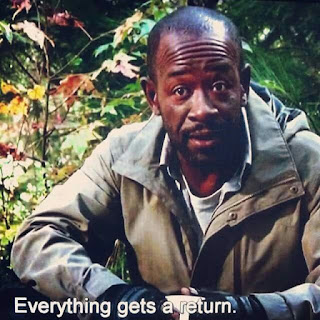 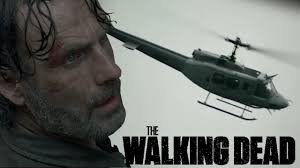 The Walking Dead gets real.

Pick Your Brain, Over The Wall

Check out this zombie name generator